Distilling the essence of an entire Arts community and brewing an exhibition that seeks to intrigue, invigorate, and involve, is the goal of arts promoter Terry Rooney as she mounts her second Amherst Biennial.

Mustering this type of project requires a personality that can deal with the politics and requirements of many municipal departments, the stuffiness of academics, the organization of an army of artists, site securing, management of volunteers, fundraising, insurance, transportation, media outreach, and the general logistics of mounting a  traditional exhibition.  Rooney’s enthusiasm for the the project is credited to “...the incredibly exciting art produced in the Valley.”

Forty-six artists participated in the project including two octogenarians and an amazing teenager from Deerfield Academy.

Peter Krasznekewicz is a seventeen year old phenom whose Little White House Project has been seen in various incarnations around the Valley beginning in 2011.    Four of his houses now sit on the lawn of Hampshire College as part of the Biennial celebration.  When I was first told of the Little White Houses, I imagined objects slightly larger than a breadbox.  Yet there on the grassy knoll of Hampshire’s main entrance, the Little White Houses greet you with words.  Simple bold black mini thoughts culled from the poems of Emily Dickinson. The houses are far from little.  You could park your motorcycles in them if the houses had a door, but they are windowless sealed contemplative structures inhabited only by a phrase.  Sometimes as simple as a single word-”JOY”-or a mantra- “Dwell in Possibility”-or a fragment that challenges you to finish the thought-”The possibility’s slow fuse is lit.”

As one drives in and out of Hampshire College the collective formation of the houses and their emblazoned thoughts present a different perspective, a poetry of landscape that is a joy to behold. Amazingly, the young man’s project has included a total of 38 houses in its peripatetic history.

Adjoining the Little White Houses at the Hampshire College site is a monumental tower of heavy bent steel lyrically rising from its base in a facile defiance of gravity.  The convoluted mass of interlocking tendrils is the work of Matt Ewald Johnson.   Johnson’s massive oculus from the first Amherst Biennial still stands in its place in  Kendrick  Park.  It is in the process of becoming a part of Amherst’s permanent public art collection.

A newcomer to the Amherst area, Dawn Howkinson Siebel, is represented at three different Biennial sites.  The Frost Library at Amherst College  showcases a triptych of her 343 firefighter portraits executed on burnt wood, an homage to the 9/11 tower disaster.  However, most striking are her  two biblio-sculptures cleverly placed in the center of the Jones Library’s Atrium.  The pressed open pages of two ancient encyclopedias are the springboard for Siebel’s collaged fantasias.  Visitors searching for their book of choice are destined for an encounter with Siebel’s provocative mixed media constructs.  The impact of these two pieces of public art aptly demonstrate how important the proper placement and location of public art is to its overall success.

In addition to the drawings, paintings, and three dimensional works that comprise the 2012 Biennial, the performance art of Karen Dolmanisth is being staged in a series of incarnations at the Amherst College Mead Museum.    THE BALANCE: NATURE/SPIRIT/BODY/BREATH IMMANENCE, is a site-specific work featuring dance and music presented outdoors in the Museum’s sculpture court, or in case of uncooperative weather, indoors. 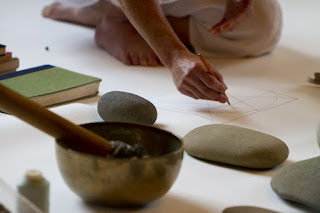 I was in attendance at the first of these week-end performances where the threat of rain moved the project to the quiet of the Renaissance Room of the Mead.

Set on the floor of the Renaissance Room’s ancient floorboards was a geometric arrangement of muslim floorcloths, large swaths of drawing paper, and a collection of sealed objects of unknown origin.

A series of smooth river rocks defined the perimeter of the space which was adorned with feathers, collections of autumn leaves, a meditation bell, a neat pile of books, floral plumes, a series of colored bowls and an oversize spool of white yarn.  What followed was a yogic exploration of this space in what I call “buddha dancing”-a deeply intuitive observation of a trancelike experience that included sustained posturing, hypnotic drawing, a rain of pine needles, and a transpersonal experience between artist and audience.  Interspersed through the happenings was the recorded soundscape composed specifically for the performance by a duo of musicians known as “TOO HUMAN.”

Dolmanisth is always compelling, unpredictable,  and treading a challenging artistic path that takes her and her audiences to undiscovered country.

For information in regard to the upcoming performances of Dolmanisth and complete information on all facets of the Amherst Biennial 2012 contact Terry Rooney at the Pop Up gallery at 59 Boltwood Court in downtown Amherst or by visitingwww.amherstbiennial.com.

Posted by Amherst Biennial at 2:09 PM

Art Patrons for Art in Park